Developing a running nutrition plan for an ultra-marathon can be a challenge for even the most seasoned runners. Adequate race nutrition can be the difference between powering through the entire race vs. pulling out at checkpoint 3 due to nausea and vomiting.

For those that have read our article on carbohydrate and caffeine, you will know that carbohydrates should be your main source of fuel during a race. This is contrary to some who aim to burn fat when running (Ketogenic diets). However, current evidence has not established benefits of utilising fats as fuel compared to carbohydrates when running. For this article, we will assume you want to use carbohydrates.

Knowing your estimated finish time will help when planning your race nutrition. For every hour you are running, a maximum of 60 grams (approx. 200 calories) of glucose can be digested. Any more than 60 grams will likely sit in your stomach, increasing risk of gastrointestinal upset.

So when planning your total nutritional intake, you can use this formula:

For example: Sam has is predicting his Ultra Trail Australia 100km time to be 9 hours 30 minutes (Tell him he’s dreaming). Therefor his total carbohydrate intake would be: 9.5 x 60 = 570 grams of carbohydrate.

Despite research stating we can eat up to 60g carbohydrate per hours, studies of ultra runners show most only consume about 40g and have no issues. We recommend having enough food for 60g per hour, however it is not expected that you will consume every gram of this. Having slightly more running nutrition than you need than less is always a god thing

First off, we’ll look at a runner using carbohydrate gels and drink. Personally, this is my primary fuel on race day. I use Shotz gels and Tailwind Carbohydrate drink (we are not associated with these company’s, many other brands make similar products).

For a 9 hour race with half gels / half carbohydrate drink.

If we say that Leg 1 of a race is 2 hours long. We may use 2 x Shotz gels and 2 x scoops of Tailwind in a bottle of water. This equals 110 grams of carbohydrates. Just under our 120 gram maximum intake.

The best way to plan your race is to estimate the length of each leg of the race and use this to estimate carbohydrate needs. It is important to remember that carbohydrate drinks need water. So more gels may be needed for longer legs as less water may be available.

Using whole foods for longer races is possible. At faster running speeds, our body sends less blood to the gut, as it is not vital for running fast. However at slower speeds we are still able to absorb some whole foods, so the risk of exercise induced gastrointestinal upset is lower. Long races such as 100km or 100 miles are likely to be slow enough for the average runner to handle some solid foods.

Using the same formula as above, it is easy to estimate the amount of carbohydrates needed.

It is important to remember to avoid high fibre, protein or fat foods when using whole foods as a source of energy when running. Simple things like taking the skins of potato or using white bread rather than wholemeal can help reduce fibre content.

Caffeine can have great benefits at different points during a race. It may help pick you up out of a slump, or give you the energy required for that last push. Conversely, in may increase feelings of anxiety or increase risk of gastrointestinal upset in some runners. Therefor it is important to practice using caffeine in your training. Caffeine can be taken in many forms including coffee, coca-cola, certain types of gels/carbohydrate drinks and in tablet form. We talk further about caffeine intake on race day here. 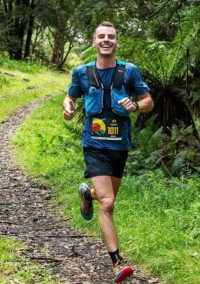